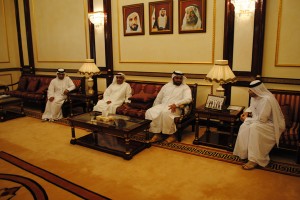 His Highness Sheikh Mohammed bin Hamad Al Sharqi, Crown Prince of Fujairah receives in his Palace the delegation of the UAE Athletics Federation headed by President Ahmed Al Kamali, also a council member of the International Association of Athletic Federations, Head of Organizing Committee GCC, President of the UAE Athletics Federation and National Olympic Committee Board member. Also present  Nasser Sultan Ma’amari Vice President of the UAE Athetics Federation and Member of the Board Management Association of West Asian Athletics and Saad Al Mehri Secretary General of Mehri Regulatory Commission states Cooperation and Secretary General of the  UAE Athletics Federation.
During the meeting, Sheikh Mohammed stressed the importance of attention to individual games, which reduced the time which is the shortest way to achieve accomplishments, the UAE is rich in talent and raw materials that can be refined and reserve us a place on the podium for global prospects.
His Highness said that sport has become a manifestation of progress and prosperity among nations and peoples and mirrors the extent of interest in the youth sector, stressing keenness of our leaders to reward all Federations for sporting achievements and HRH stressed the importance of attracting young people to participate and exercise as a good investment to the country, noting the importance of the social environment surrounding the direct impact on the performance of athletes also noting that the Emirate of Fujairah is a distinguished place to set up camps for the national training.

He paid tribute to his efforts of the UAE Athletics Federation and their determination and their achievements.  He also spoke of UAE Athletics Federation’s participation in the Olympic Games London 2012 and congratulated the Federation for qualifying some of the runners to the Olympics, noting that this sporting event is the largest in the world and expressing the hope that history will repeat itself and our athletes will achieve what we achieved before with a golden hero Sheikh Ahmed bin Mohammed bin Hasher Al Maktoum in the Olympics.
President Ahmad Kamali, a council member of the IAAF and Head of Organizing Committee GCC, President of the UAE Athletics Federation expressed deep thanks and appreciation to His Highness Sheikh Mohammed bin Hamad Al Sharqi, Crown Prince of Fujairah to host the delegation of the Federation and also expressed his thanks to His Highness for his support.