Dahi Khalfan during a meeting with the delegation receiving a gift

The meeting was characterized by  a number of things about sports in general and athletics. The philosophy of the General Command of Dubai Police is to provide support to all segments of society and support for the community and its commitment to our youth and our athletes. This is one of the best investments of the nation.

Best wishes were conveyed  to our delegation participating in the  Olympic Games  in London during the period from July 26 until August.12th 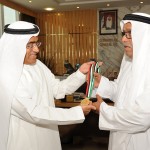 President Ahmed Kamali council member of the International Association of Athletics  Federations and President of the UAE Athletics Federation at the beginning of the meeting gave sincere thanks and gratitude to His Excellency Lieutenant General Dahi Khalfan Tamim, General Command of Dubai Police for his support and support particularly with the Stadium at the Dubai Police Officers Club for the activities and programs which contribute to the success of athetic.