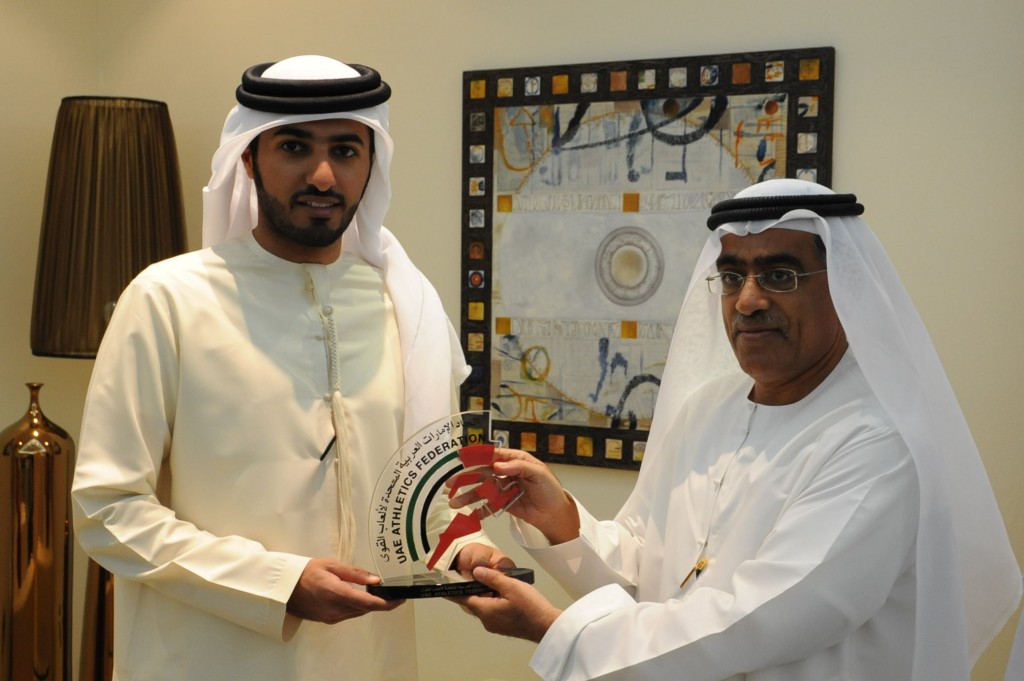 Rashid Al Nuaimi, welcomes Athletics in Ajman and coordinates with the UAE Athletic Federation  to  launch, The Ajman Club aka “Orange” and discusses the establishment of an international Race for next November

The visit went perfect and the Athletic Federation is focused on having the Ajman Club join the Athletics Family especially since the Club is strong and influential in the sport, and their presence within the system of athletics gives competitors a lot of momentum and competition.The Club and the Emirate has talents. The Athletics Federation is one of the premium sports Federations on a state level, and  receive an award last year, as the best local sports institution from the”Mohammed bin Rashid Creative Sports Award” At the end of the visit the delegation presented the UAE Athletics Federation Shield to Sheikh Rashid Al Nuaimi, in recognition for his efforts in supporting the sport and  thanked him for his support in opening new prospects for Club Ajman.

Kamali: The meeting was “excellent” and beneficial.
Athletic President Ahmed Al Kamali, said that the meeting with Sheikh Rashid bin Humaid Al Nuaimi, and Ajman club president was “excellent” and many positive points were covered that will benefit the sport in the near future.
He wished positive cooperation in all future meetings with the officials regarding  the sport, especially. since the Sheikh Rashid bin Humaid Al Nuaimi expressed his strong desire and emphasized the importance of supporting local sports raise the level of competition as well as the flag of the State in various international forums.
The President of the Athletic Federation said that the presence of Ajman within the system of athletics, would strengthen the capacity of the games and provide them with talent capable of achieving a leap in level, taking into account the capacity of the emirate itself for hosting many events and major tournaments, local and international, including possession of infrastructure and assets to attract any tournament.
Saad Awad Al Mehri  Secretary General of the Athletic Federation stated an organizational race chart will be ready during shortly for submission to the Sheikh Rashid Al Nuaimi, as requested,  Al Mehri added he was confident of the ability of Ajman to organize the best tournaments because of their technical competence and administrative , in addition to there are several locations that facilitate the establishment of such tournaments, as well as infrastructure to attract sponsors and advertisers.